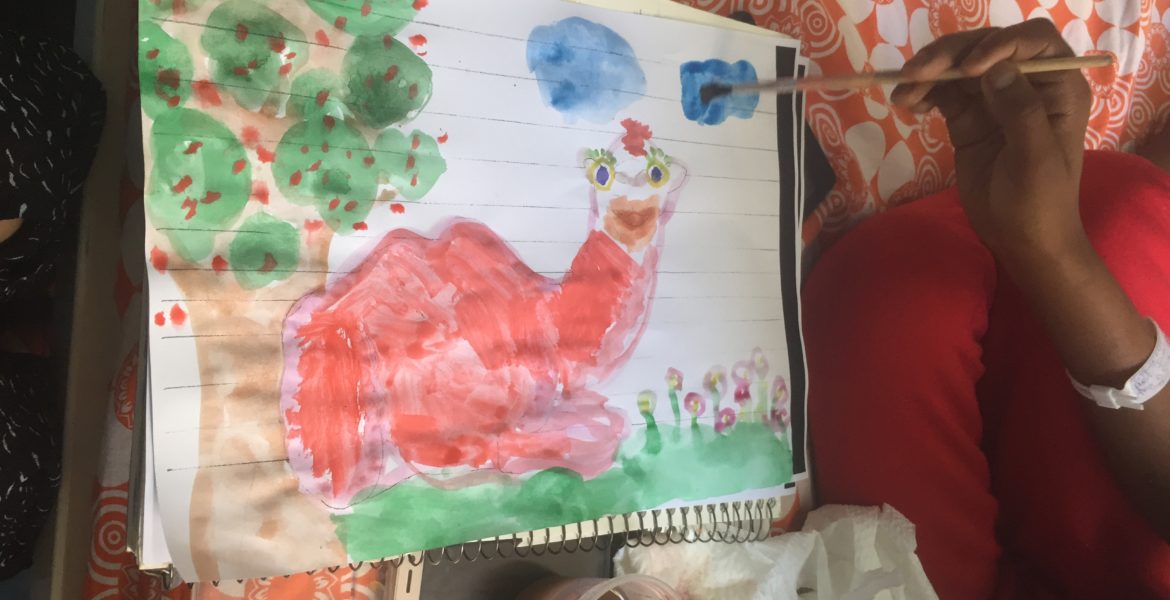 As a volunteer with Kids Kicking Cancer (KKC), I go to the pediatric cancer ward at Steve Biko once a week. I spend a few hours reading one-on-one at the bedsides in the boy’s ward and the girl’s ward, and sometimes in the isolation ward, if there are children there who would like a companion and a story. Many of the kids go home on the weekends, if they are well enough. I come on Fridays, so I usually only see the ones too sick to leave the hospital. Some children sit alone, their family far away in rural areas, some have a relative staying in the family-member dormitory, and some are crowded with loved ones around their beds. I read to them all.

Botshelo is 12 and very stylish, and usually laying supine, alone. She always asks for another story, so we end up reading three or four. When I ask her about her favourite parts, she consistently points to a part of the story that didn’t seem to me especially climactic. Once, when I asked her why those were her favourite parts, she told me it was because she doesn’t like animals.

“Not even a kitten?”

“Wow, but all these stories have animals.”

Botshelo still likes the stories, but she also likes when we watch meditation YouTube videos on my phone, she says her sensei Moses (a program coordinator with KKC) taught her about meditation and now she counts 5 breaths every morning when she wakes up. She says it makes her feel good. I told her I also try to meditate, and that I’ve worked up to 20 minutes. She rolls her eyes, “that’s too much” she says. The next visit, I brought several nail polishes.

“Do you want me to paint your nails?”

“No, you can pick the colour. I’ll paint your nails, you don’t have to paint my nails.”

“Yeah! Of course. Any colour you want. Do you like this one? Red Glitter Hearts? Or this one, Rainbow Confetti?”

Botshelo also likes art. I shared some of my art with her and showed her how to use a calligraphy pen. Then she asked for the whole set and we took turns drawing portraits of each other.

“That does not look like me at all,” she told me.

I also see Kgomotso, an 8-year old who takes up just the top quarter of his bed with his small, crouched body. He has the same round face as his mother, who is always at his side. Kgomotso cannot speak, as a consequence of his cancer treatment, but he always nods yes when I ask if he wants me to read him a story. He and his mother listen with the same fascination and point to the pictures. She speaks for him:

“He has seen an elephant just like that, when we went to the zoo. Remember, Kgomotso?”

“You’ve seen a monkey too – when we went to see them at the sanctuary in Hartebeesport.”

Kgomotso smiled, looking up towards his mother.  Last week I brought the rest of the calligraphy ink bottles for Botshelo to try, and brought several copies of a line drawing of a camel for both of us.

“How about we both work on this picture this week, and then share next Friday?”

“Okay” she said, demurely, while also scrolling through her phone and talking to her grandmother.

Later I went to Kgomotso, he had a colouring book open on his bed. We traced the mazes together and took turns with his watercolours on another copy of the camel. His mother asked if I wouldn’t mind if she ran quickly to a shop, she wanted to take this opportunity to go out without having to leave him alone. Kgomotso and I continued to colour, and I filled the silence by teasing him and chattering about his colour choices until he smiled. After a few minutes, he excused himself, pointing to the toilet. He stepped down from his bed onto a metal stool, and down again into very small, fuzzy, blue slippers, embroidered with soccer balls. With a practised hand, he methodically unplugged several cords connecting his chemo to the outlets by his bed and made his was to the washroom – chemo rolling beside him.

“Hey, can I show your picture to Botshelo, in the girl’s ward? She is also coloring the same picture, so I want to show her how good yours is. I’ll be right back!”

I walked back to the girl’s ward.

“Botshelo! Do you know Kgomotso, in the boy’s ward? He already finished coloring his camel – look!”

“He really did that?”

“Yeah! And now you have to make yours beautiful too!”

I returned Kgomotoso’s picture and said goodbye, just as his mother was coming back with a bag of sweets. We smiled and cheerily said to each other “see you next Friday!” – in accordance with the happy mood, I try to cultivate during my visits, in spite of the context.

As I was walking out of the ward I saw, through the windowed-walls, Botshelo leaving her bed. I waited, wondering where she was going. She straightened her dress and unplugged her chemo, rolling it alongside her – out of the girl’s ward, down the hall, and into the boy’s ward. She went over to Botselo’s bed and pointed to his camel picture and smiled.

I was too far to hear what she said. 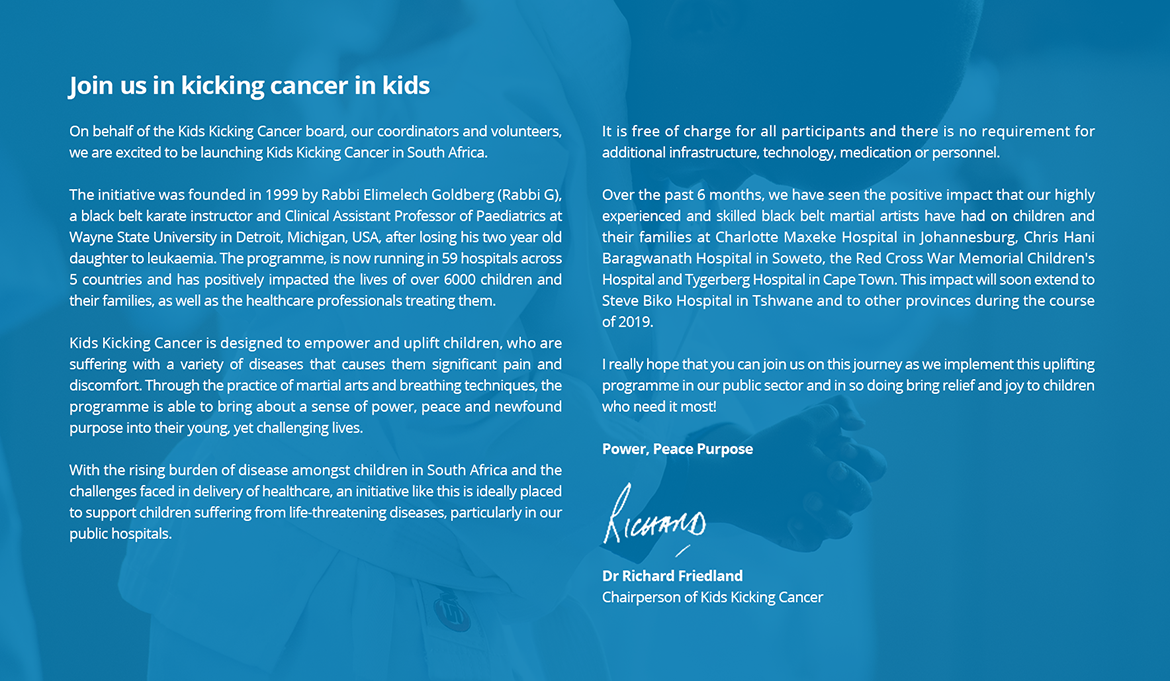